MY SUCCESS STORY AS AN ANIMAL ACTIVIST

I am Chiemeka Chiedozie Animal activist, Campaigner, Humane Educator and the founder of the Humane Global Network, An  organization registered in Nigeria  promoting animal welfare and vegetarianism in school. The Seminars in schools has been carried out in over 200 schools both in Nigeria and outside with proof of photographs.

I started the campaign in school teaching kids in Nigeria on the need to be humane since 2010 and have been consistent doing this in the last eighty years. As a campaigner, I was first featured in Animal times, Magazine 2012 published by the people for the ethical treatment of animal (PETA).

I have been featured also in over twenty (30) newspapers and online media platform in Nigeria. In 2012, I was made the world Animal Day Ambassador for Nigeria. Severally, I have been sent a sponsorship form to fill to be able to attend the animal care expo conference in America.

In 2012, I was invited to share my animal welfare experience to the staff of Society for Animal Welfare Ghana (SWAGH) in Dodowa, by the World Animal Day ambassador in Ghana, Mr Ujakpa Martin. In the year 2014, I was also sent an invitation letter to come down to Liberia by Mr Morris Darbo, in 2013. the founder and Executive Director of Liberia Animal Welfare and Conservative Society who is also the World Animal Day Ambassador for Liberia but could not make it..

In 2015, I was invited to speak on vegetarianism and animal talks by the Veggie Victory, the organizer of the Lagos Vegetarian festival that attracted a lot of vegetarians across the globe and students to the venue.

As a strong Nigerian Animal Activist, I was recently given an Award by a Nigerian newspaper as an Animal ambassador in Nigeria for my good works in Animal Welfarism in Nigeria

Recently , I have been sponsored  to attend the African Animal conference to be held in United Nation Nairobi, Kenya  as delegate by the African Network for Animal Welfare. (ANAW) which was supported by the Federal Government of Kenya and United Nation for Environment. 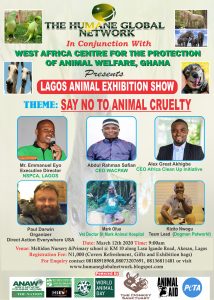